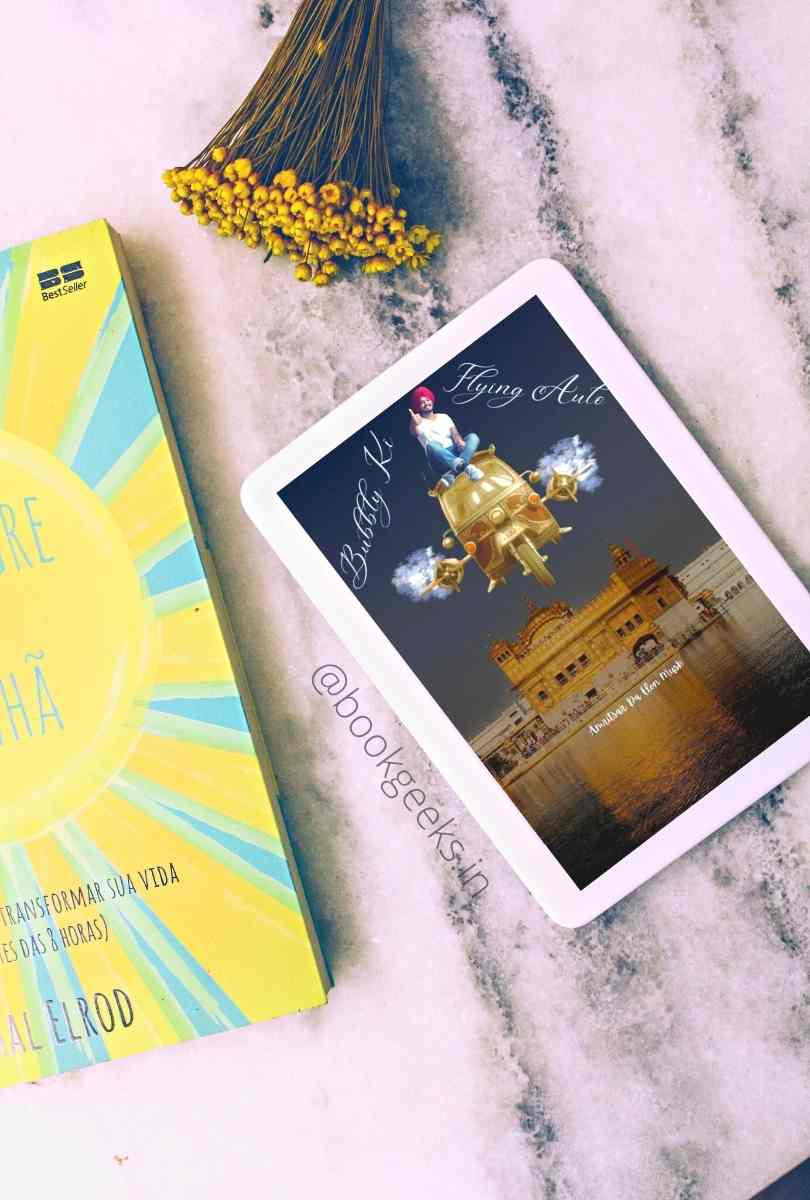 “When something is important enough, you do it even if the odds are not in your favor”

I have to be honest here, when I first thought about it, the title and the cover struck me as rather childish. And yes, that was me forming preconceived notions about the book just by a single glance at the cover. Guess, even after all the experience and conventional wisdom, I am human, after all.

Bubbly Ki Flying Auto by Anuj Tikku is a mix of family drama with a hint of realistic fiction. Read on to know more about the book and my experience of reading it.

Expect a short read of just over 100 pages. Expect a book that is set in the small and culturally vibrant city of Amritsar. Expect an inspirational tale of a young man who dares to dream big. Finally, expect contemporary fiction stewed in the subtle flavours of scientific ambitions.

The language is simple and the writing straightforward enough to be picked up by beginners.

Bir Singh is an honest and hardworking man who runs an auto-rickshaw business in the bustling city of Amritsar. But slowly and steadily as Bir’s generosity forces him to frequently come to his drivers’ aids in times of need, often neglecting the profit margins, his shrewd competitor Vikaram Rana launches a nefarious plan to gradually kill his business. Eventually, the business collapses and Bir Singh has no choice but to pause his son Bubbly’s education, forcing him out of school, and making him drive an autorickshaw to feed his family.

The young, energetic, and ambitious Bubbly, who is a fan of Elon Musk, has no choice but to give into the circumstances and provide for his family. Barely making ends meet, he is frustrated by his poverty and knows that the only way out of this tricky situation is to think and do something out of the box.

Inspired by the words and actions of his ideal Elon Musk, he decides to do something never thought of before. He decides to convert his auto-rickshaw into a flying taxi and gain a definite advantage over others, thereby paving the path for financial freedom and success.

But in his quest to achieve this ginormous task, he will not only have to face technological and financial challenges, but also the wrath of his enemies who will leave no stone unturned to stop Bubbly’s efforts and bring his downfall.

Is Bubbly simply too ambitious? or

Is he just a mere fool?

What scheming will Vikram Rana do this time?

Will Bubbly succeed in bringing his dreams to reality?

What is Elon Musk’s role in all of this?

While at the first glance, the plot seems a little far-stretched, a little too ambitious and unbelievable, as the pages roll by, the author does a good job of convincing the readers. Let the concept be inconceivable and highly unlikely, it depends upon the writer to convince the reader and make it seem believable. This is where Anuj Tikku has done good work.

How good are the characters?

There is the main character of Bubbly and then there are supporting characters like Ram Charan Yadav, Hasina Sidhu, and even Elon Musk, who do a decent job of lending value to the story. Their goodness and positivity are sharply contrasted by the evil that manifests through the characters of Vikram Rana and Gurinder Sidhu.

Though they aren’t poorly written characters, they do lack a certain depth and emotional connection with the reader. Except for the working relationship that exists between Bubbly and Ram Charan, the relationships that are portrayed between the other characters could have used some extra work.

Certain character transformations could have also been worked out in a better and more believable way.

I liked that the book inspires one to chase after one’s dreams, no matter how incredulous they sound, and no matter how many people predict their failure. The book also encourages one to read up and learn a thing or two about Elon Musk.

There are some troubling references with respect to the Sikh community which seems racist and distasteful. These aren’t made as personal remarks but constitute a part of the story. They talk about some stereotypes while trying to reinforce them. This is especially seen when Bubbly himself talks about it. But even then, no matter the demands of the story, to me as a reader they appear in poor taste.

The book being a short read cannot do justice to the story if it tries to include a lot of elements. But that’s exactly what happens when a half-baked romance angle is introduced between Bubbly and Hasina. The romance is poorly executed, with no emotional or romantic connection present between the two.

In the end, Bubbly Ki Flying Auto is a short inspirational read that narrates the story of an ambitious young man from Amritsar who dares to dream big and has the courage to put his dreams into action.

Cannot wait to read it? Buy your copy of the book using the link below.