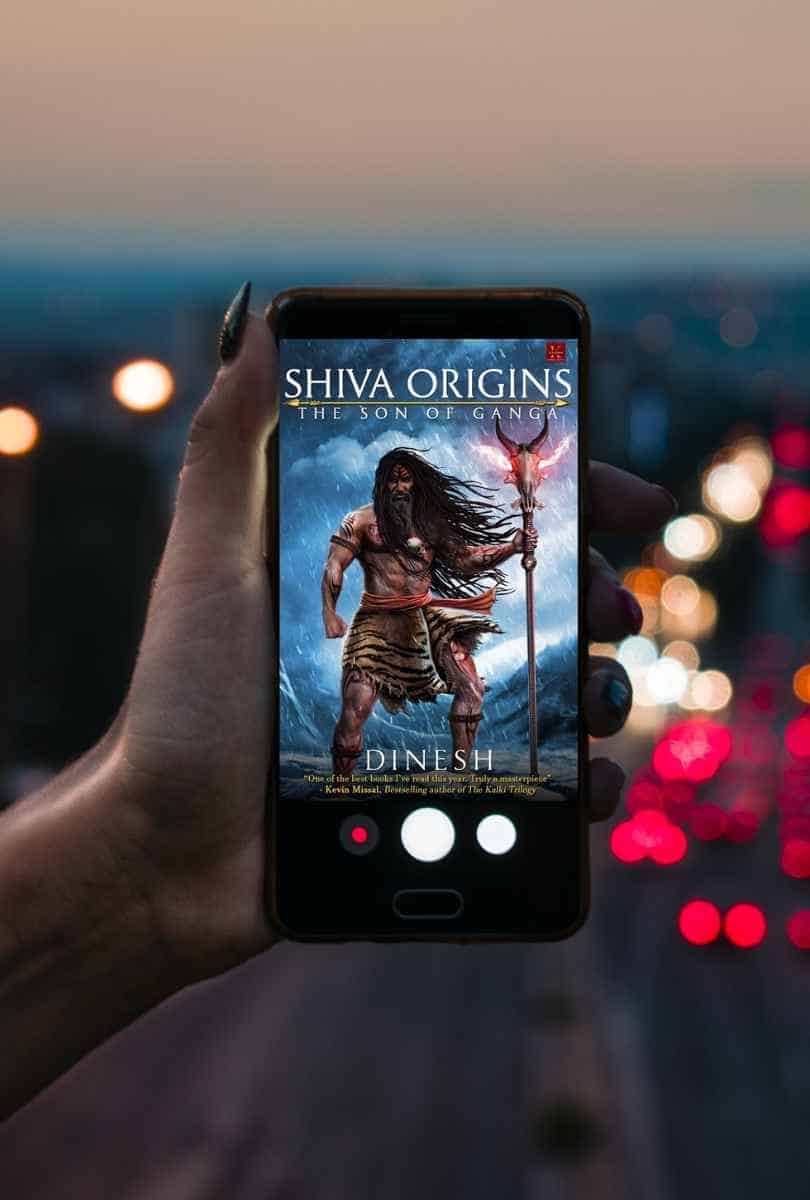 “Being a yogi, he could sense the awakening of something sinister. Something so terrifyingly evil that it made the hair on his back stand tall.”

Of late, I have been seeing a lot of mythological fiction books on Kindle Unlimited, some with a decent number of recommendations and reviews. Having the subscription myself, I was on the lookout for a book in the genre of modern-day mythological fiction cum thriller (somewhat on the lines of The Hidden Hindu, which is a book that I loved reading) when I chanced upon Dinesh Veera’s Shiva Origins: The Son of Ganga. The cover looked impressive and the blurb promised just what I was looking for. Read on to know more about the book and my experience of reading it.

Even though the language is rich, the book can be picked up by any level of readers including beginners.

Expect a medium-length read (under 200 pages) that combines mythology, medieval Indian history, and elements of fantasy to bring to you a book that has just about everything – entertainment, drama, romance, and lots of adventure.

The summary of Shiva Origins: The Son of Ganga

The Earth faces an impending disaster; a doom that would be brought by a mighty force. A force that is neither man nor God, but something beyond the realms of power as we know it. The future of the planet Earth and the billions who inhabit it remains obscure. But something should be done before it is too late; before the powers that are, become unconquerable.

Abhay Sharma, a college student is a curious young man. Interested in history, archaeology, and hidden secrets of the ancient world, he undertakes a quest to unravel an ancient mystery that finds its root in the Chola kingdom.

But while Abhay is a man of impressive knowledge and caliber, not everything can be predicted or planned. And this misguided quest ends up with him unleashing a supreme evil, the likes of which this world has never seen.

The only way to save the planet is to decode the enigma behind a powerful Hindu God; a secret so deep that even the ancients kept it hidden safely. For it is a secret that has the power to change the future of the entire human race.

As for Abhay, he is stuck in a race against time and a conundrum that only he can solve.

While from the outset, the book may seem like any other mythological fiction, but once you get the hang of it, you know just how unique and unconventional the plot really is. The story happens in three separate sections – the mysterious quest for an ancient secret, the awakening of the evil and the story of its origins, and the secrets shared through an enigmatic conversation.

How all three intertwine and give us an unputdownable read is what makes this book click. Not just that, the glimpse of what’s to come in the next book adds to the mystery and leaves the reader wanting more.

The writing is fast-paced and the book serves what I would call masala entertainment. There is just about everything served in equal doses – romance, mystery, adventure, action, and drama – loads of it. This type of writing in addition to having many advantages has its own pits and downfalls, but if you aren’t a voracious reader of the genre, you are good to go.

What I love the best?

I love how the book combines historical facts, mythological legends, and fantastical elements and manages to weave them into a story set in modern times. The element of danger and adventure proves to be a page-turner. This is especially true for the scenes set in the mayavi jungles of Tamil Nadu.

The characters could have done a little more work. They mostly feel like accessories to the plot and the reader doesn’t connect with them, the way she should.

The romance could have done a lot more work, it felt a little forced and a tad too mechanical. Again, the connection within the romantic pair was missing. The feelings, the emotions, and that aura of love were simply not there. It all felt too rushed.

Shiva Origins: The Son of Ganga is an unputdownable modern-day mythological thriller that takes us on a heroic quest for a primordial secret that lies deeply buried in mythology and ancient history. A great plot with a unique blend of genres, fast-paced narration, and an underlying theme of adventure and doom keeps the reader on their toes and offers them wholesome entertainment.

Can’t wait to read it? Buy your copy of Shiva Origins: The Son of Ganga using the link below.