The Drop and the Glop | Sanjiv Saran 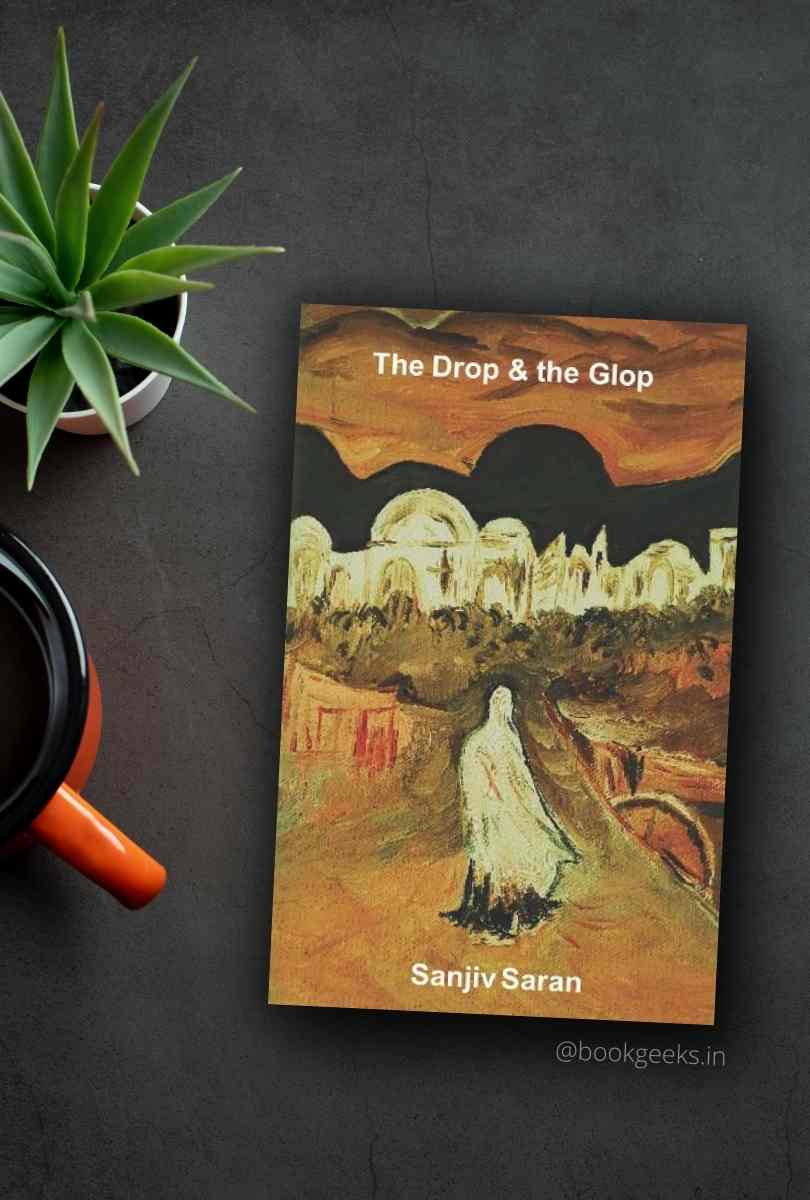 What is this border? I hear it’s just a line drawn by some stupid foreigner. We don’t need lines to tell us which is our country. “

Big books often intimidate me. And the reason is quite obvious, they demand much more time, much more effort, and much more commitment from the reader. While the shorter ones last you for hours, big books become your companions for days. And imagine having to read a book that you aren’t enjoying. Well then, the journey is doomed.

Thankfully, this wasn’t the case with me when I picked up Sanjiv Saran’s The Drop and the Glop. Read on to know more about the book and my thoughts about it.

Expect a big book, one that is close to 600 pages. Expect a historical fiction that is set during the tumultuous years of the 1960s and 1970s against the backdrop of India-Pakistan relations and their wars. Expect a book that gives you a unique and rather interesting set of characters.

As far as first impressions are concerned, the book fails to create a decent one. The cover is bland and does nothing to arouse the reader’s interest. A quick look at the latest book cover designs would have helped the author garner much more interest in the book. But no matter how beautiful the art on the cover looks, the overall design is dull and uninteresting.

The blurb saves grace here, immediately telling us what the book is all about and what interesting scenarios, events, and characters the readers can expect from the story.

The Drop and the Glop can be picked by any category of readers but it might provide some challenges to beginners who may get confused with the unique style of writing and choice of words.

The summary of The Drop and the Glop (spoiler free)

A power-hungry Pakistani politician is busy paving the path for his future success in the cut-throat theatre of Pakistani politics, all the while being involved in a scandalous affair with a dusky beauty. The affair, if brought forth, has the power to ruin his career.

During the tumultuous war years, a spy (who undergoes a change of heart because of the harsh realities and the brutal atrocities that he witnesses) gets trapped on the wrong side of the border.

A nomadic Bakarwal shepherd girl, who witnesses a betrayal at a young age gets shaped by the tragedies that befall her young life and is inducted as an undercover infiltrator.

A gorgeous young beauty who wants to ace her career gets recruited as a CIA agent.

A Delhi teenage boy, just out of high school, who wants to explore the mountains, lands up in the Himalayas as a hitchhiker and undergoes life-changing experiences.

What events would intertwine their worlds and bring their stories together?

This book gives new perspectives, and new points of view to look at the India-Pakistan conflict over the years of 1965 through the 1970s. We learn just how nascent our country was, how it was trying to make good work of its newfound independence and carving a name for itself in the international arena.

The geographical descriptions of the places are on point and they immediately transport you to the said era and locale. Whether it is the majestic beauty of the Himalayas or the verdant green jungles of Bangladesh and Sundarbans, the vivid imagery makes you want to pack your bags and indulge in that wanderlust.

The writing is rather unconventional. The sentences are terse and brief, without the unnecessary air of pretension. This sort of writing (that relies on short staccato sentences and statements as opposed to flowery and lyrical descriptions) helps make this book a better-paced read.

These short sentences used both in descriptions as well as conversations pave the way for a smooth read. However, sometimes they also tend to confuse the reader. Especially so, when descriptions and elaborations are skipped even where necessary.

I love how the book isn’t judgemental nor preachy nor does it try to take a ‘holier than thy’ approach when it refers to the events that occur between India and Pakistan. As an Indian, the author does a great job of being as unbiased as possible and manages to showcase narratives from both sides of the border.

Thus, in Yara, Vikram, and others, we see ordinary people who reflect the sentiments of the masses. They live in a politically charged environment orchestrated by the powers that be, and yet they somehow exhibit passive indifference to these events. In their eventual character transformations (they start with strong patriotic fervor) this can be seen very clearly.

The Drop and the Glop provides wholesome entertainment. The book offers everything from action, adventure, espionage, mystery, and romance to spirituality and the essence of the divine.

My only qualm with the writing is how parts of it sometimes seem too detached, too disconnected. As if they were written in silos, and not as parts of a cohesive whole. Between chapters and events, the changes come too suddenly, too abruptly. And I don’t mean it in a good suspense-driven way but in a disconnected detached way.

I love how different and unique the characters are. But what surely would have turned the book into a great read is the emotional depth which they don’t seem to exhibit. Their passions, dreams, emotions, aspirations, and inner dialogues are not given due voice. Wherever they do try to surface, it is too mechanical, too impersonal.

A web series would be ideal

The book runs like a saga, spanning decades and with a multitude of strong main characters, events, and geographical settings. What I would love more than anything will be to see it turned into a web series. This way the writing would come alive not just to the readers but also to many others who would otherwise be deprived of a great story.

Can’t wait to read it? Buy your copy of The Drop and the Glop using the link below.