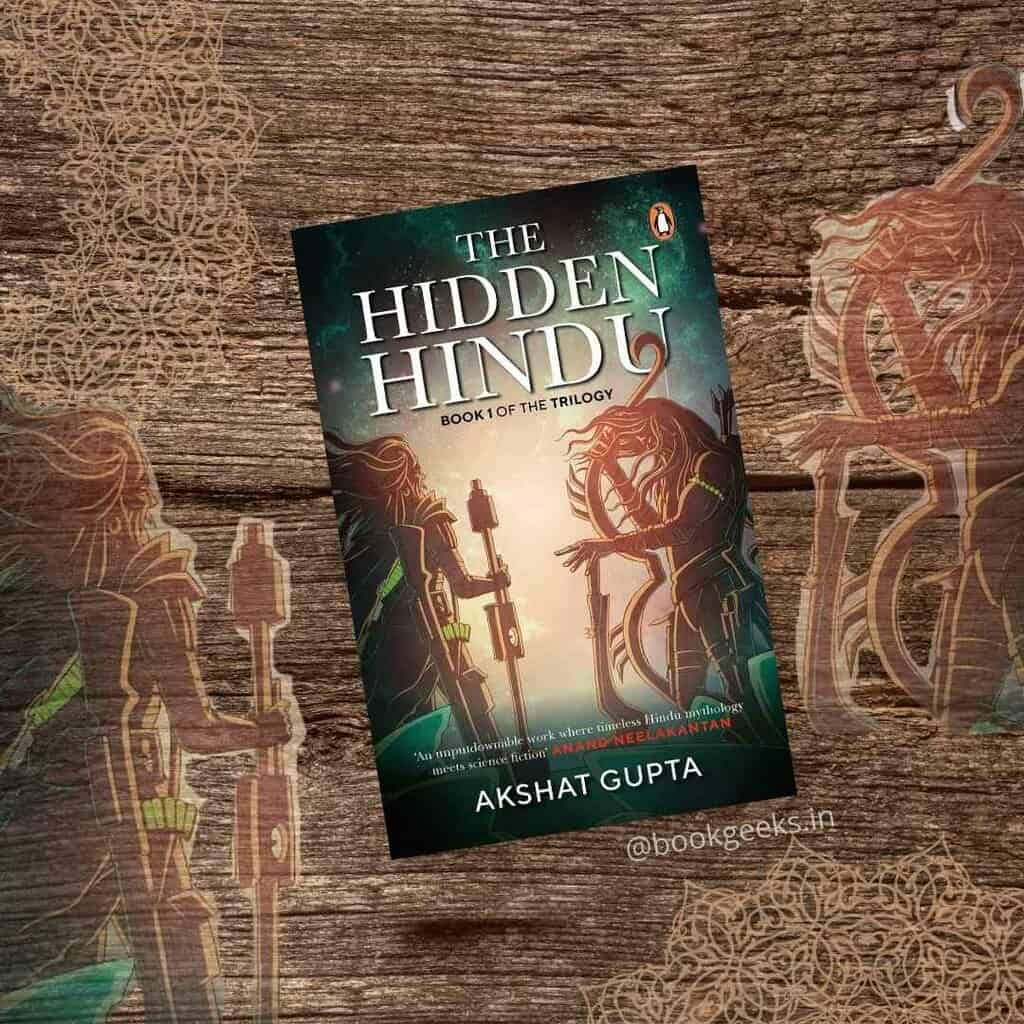 After a long time, I have chanced upon a book belonging to the modern-day mythological thriller genre. As far as I recall, it’s been quite a while since I last read a blend of mythological fiction, adventure thriller, and sci-fi. And with my expectations set quite high, I sat down for a roller coaster of a ride and started reading Akshat Gupta’s The Hidden Hindu. Read on to know more about the book and my experience of reading it.

From the cover image and background graphics to the bold font and the blurb at the back, to the glaring recommendation coming from stalwarts like Anand Neelakantan and Ravi Subramanian, everything seems to work really well. Thus, as far as first impressions are concerned, The Hidden Hindu creates a mighty good one.

The language used is simple yet impressive and keeping that in mind, the book can be easily read by a beginner-level reader. That being said, it will be a treat for everyone across the broad spectrum of readers from beginners to voracious.

However, elements from the Hindu puranic universe and Itihaasa are woven throughout the book, and hence, a little prior knowledge may prove helpful.

Starts with a bang

One of the best things about the book is that it starts with a bang. The first scene opens in 2041 with a worried old lady and Prithvi, a young man of 20, conversing about something. An unbelievable and tragic incident of the past that defies all logic and reasoning, and that forever changed the course of their lives.

Soon after, we are taken to a remote research facility in the heart of the Andaman Islands, where a highly covert mission is underway. The plot thickens quickly and the reader is hooked throughout.

The story as it goes

Book one of the trilogy mainly revolves around the eccentric, baffling, but charismatic character of the Aghori Om Shastri, who claims to have lived for thousands of years and has witnessed all the four yugas, including the events of the Ramayana and the Mahabharata.

After tracking him for over 200 years, it is decided to capture and interrogate the mysterious man. And it is during the covert interrogations that these unbelievable truths are revealed.

The fact that every modern tool and technique of lie-detection available to man fails to detect a single lie in Om’s story leaves everyone shocked and perplexed.

Further, his extraordinary strengths and super sharp instincts add to the enigma, for Om has the uncanny habit of doing the most extraordinary of things that aren’t humanely possible.

So, who is Om, and how does he accomplish such impossible feats?

Why is he taken into custody?

Who is conducting this super-secret operation and with what objective?

What further revelations are waiting to be unraveled?

Om Shastri’s story challenges the very foundations of the concept of mortality as we know it.

One of the major plus points of The Hidden Hindu comes from its ability to flawlessly intertwine mythological events from thousands of years ago to historical events and events in the recent past. Stories of puranic characters like Sushen, Lakshman, Vidur, etc are connected to modern historical figures like Subhash Chandra Bose.

A major focus of the book is on the concept of the seven Chiranjeevis in the Hindu universe, which has been woven into the context of the modern world, thus creating an intriguing link between ancient, medieval, and present-day India.

Even though a large part of the book is about Om’s interrogation, but the pace and ideas, are constantly thrown in and then stirred, to create the maximum impact.

The writing makes use of a good amount of research. The way Itihaasa, history, mathematics, science, and ancient knowledge are correlated and then plugged into the story is bound to leave the reader intrigued.

Character sketches and arcs are yet another strong points of the story. With every character, there is an additional layer of mystery. The pace is a little uneven. Fast, and then medium, and then fast again. But apart from that, every single aspect of the book calls for it to be labeled as a ‘must read’.

As for me, I cannot wait to delve into part 2 of the trilogy.

Can’t wait to read it? Buy your copy of The Hidden Hindu using the link below.